Fall has become a holiday, if that is possible to do to an entire season. As with most holidays, the retail shops and food chains start celebrating it three months early. Ever since the sparklers fizzled out on the Fourth of July, it has been nutmeg-laced drinks, caramel-coated apples, cinnamon-infused breads, and pumpkin-scented candles. And, as with most over-commercialization, the backlash on the Internet is real.

Of course, when pumpkin spice bratwurst is a real food item, the resulting mean memes are understandable.

I agree it’s all too much and too soon, but it doesn’t make me hate on fall or pumpkins. Although, to be fair, the real scent of pumpkin is nothing. 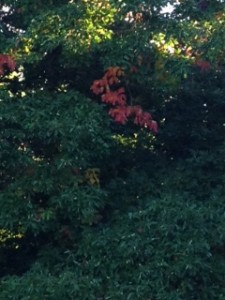 Fall is my favorite season, but it doesn’t begin for me until I can see my breath, ever so faint, in the early morning air. It doesn’t start until I have to return to the house a hat that covers my ears and a fleece that covers my bum. It doesn’t start until a falling leave makes me stop in my tracks and notice the straightforward slant of the late-rising sun. It doesn’t start until I take out my phone, not to check my messages, but to snap a picture of a red splash in an otherwise green tree. That’s when I want a Pumpkin Spice Latte, not only because it’s delicious, but because it feels right in my hand – warm, earthy, sweet. That’s when fall begins.

And that, for me, was today.