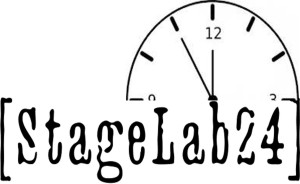 7:45 p.m. Arrived at The Village Theater at Cherry Hill in Canton, Michigan.

8:00 p.m. Sipping coffee, setting up camp, chatting with the other writers. I felt mellow. Actually, I felt like a cat with a canary. I had two play ideas rolling around in my head. Two canaries. Plus, I had my power cord.

8:30 p.m. The producers took us through a brief orientation. Each of us was to write an original 10-minute play before 7:00 a.m. the next day. There was only one question.

Ah, the Internet. A writer’s refuge. 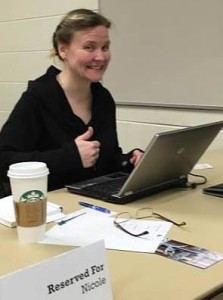 9:15 p.m. I chose between my canaries and got to work. Feeling caffeinated. Feeling good.

11:10 p.m. Feeling not-so-good. I had one page and no title. I might have picked the wrong canary. Fortunately, food arrived. I closed the laptop.

Eating. It’s what writers do when there’s no Internet.

I wasn’t alone in the kitchen. My fellow writers and I nibbled cheese, crunched chips, and ignored the two elephants in the room – the blank status board and the ticking clock. 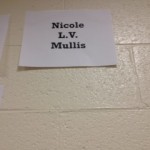 Midnight: Half the writers had something on the status board. I had two lousy pages and a bad feeling. I wanted a rough draft before 2:00 a.m. because I get loopy after 2:00 a.m. Should I start the other play or stick with this one?

I decided to stick with the canary I knew.

I decided to add a character.

I decided to never, ever do this again.

1:30 a.m. I was up to seven pages. Thirty minutes to Loopy Time. My gargantuan coffee was wearing off like Cinderella’s fairy dust. 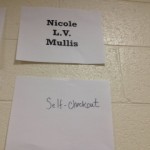 It was a double entendre.

I updated the status board. The hardest part was the cast. I needed three women, but I would love some extra actors. I added “optional shoppers” to the board. It looked…silly.

I went outside to get some air. Another writer was there. It felt good to talk to someone who wasn’t living in my head. 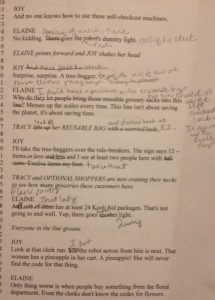 I put on headphones and listened to the computer read the play – systematically, unenthusiastically. Sounded like a dud. One of the producers, working on three hours of sleep, offered to read it. She said it was good.

I wanted to believer her.

6:30 a.m. I ate breakfast like the robot who read my play – systematically, unenthusiastically. The food woke me up enough to feel dread. I was about to hand a dead canary to a director I had never met.

7:15 a.m. My director arrived wearing a vibrant red dress and a radiant smile. I looked like roadkill. She read the play in the empty theater. I sat several seats away. Soon, I heard the best thing a strung-out writer could hear – laughter.

The genuine giggles of a tickled funny bone.

It was the sound of hope.

7:30 p.m. I returned to the theater, fully dressed and partially awake. Family and friends were due to arrive, but first I wanted to check backstage. I peeked into one of the rehearsal spaces. My director was running the piece a final time. There were five [five!] actresses and they sounded amazing.

My canary was singing! 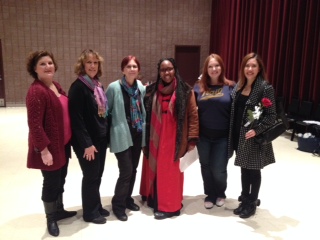 When they finished rehearsing, I started gushing. I hugged these ladies, especially my director, as if they were my sisters. Then, I told them to break their legs. 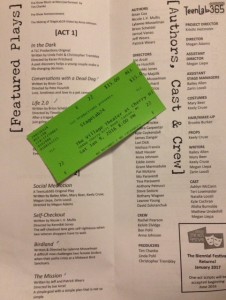 I definitely want to do this again.